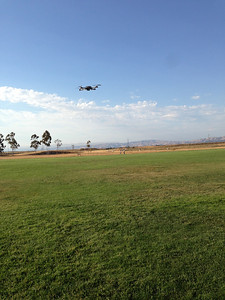 Back in May I picked up an AeroQuad Typhoon quadcopter kit at Maker Faire. I have been interested in model airplanes and other model flying things since I was little. I frequently had a styrofoam or balsa wood glider to play with in the yard. Gliders are fun – but throwing and chasing it around the yard got old after a while.

My Dad and I also had a gas powered model airplane many years ago (probably a good 10-15 years) that we only got out to fly a few times. Due to the need for a runway and space to fly we ended up having to join the AMA and a local club. They had a field and people who could help with instruction so we could actually learn to fly the thing.

I think the downfall of that experiment was the overhead of not just being able to pick up and fly it. That was a weekend hobby that wouldn’t get “fun” until a decent amount of effort was put in.

Fast forward to today where everything in that old airplane is outdated and archaic. For me, the introduction of the quadcopter (and other multi-rotor flying things) changed my thoughts on trying again. Quadcopters are generally easier to control, more stable, and the software on them can act like training wheels, keeping it upright and in the air (unless configure the accelerometer wrong).

The first few flights behind the house ended in collisions with walls and other things. I discovered the Sunnyvale Baylands Park via BayRC and it has worked out well for flying. I got the hang of it pretty quickly – and am now able to zip around the park. We’ll see how long it lasts before the first big crash.